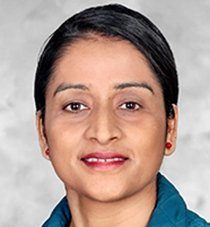 Prior to her position here at Brown/Hasbro she was an Assistant Professor of Pediatrics at the Geisel School of Medicine at Dartmouth and an attending Pediatric Gastroenterologist at the Children’s Hospital at Dartmouth-Hitchcock in New Hampshire.  During her tenure at Dartmouth she served as the physician leader for Improve Care Now (ICN) Inflammatory Bowel Disease registry.

Dr. Subedi is originally from Nepal, where she was recognized for her many academic accomplishments including the “Outstanding Student of the Decade” at the L.R.I School.  On arrival to the U.S., she completed her residency training in the Department of Pediatrics at Ascension St. John Providence Children’s Hospital in Detroit, MI, and her fellowship training in Pediatric Gastroenterology, Hepatology and Nutrition at Brown University.

Dr. Subedi is board certified in Pediatrics and Pediatric Gastroenterology.